The Warmachine European Invitational for 2015

The Warmachine European Invitational is an invitation-only singles tournament which pairs the top players from around Europe to compete against one another in a demonstration of Europe’s best in the game of Warmachine and Hordes.  It has two goals.

The Invitational is seeded through 16 Qualifier events which will take place during the course of 2015.  Qualifiers were chosen by seeking out the strongest events in multiple countries in the region throughout the course of the year.  The winner of each Qualifier earns a spot in the Invitational.  Alternate Qualifiers in each subregion within Europe are used in case the player who won a Qualifier cannot make the Invitational.  Qualified players will be seeded into a predetermined bracketed system to promote the interaction of various subregions within Europe.

Qualifiers for the 2015 Warmachine European Invitational

The events in brackets are the primary Qualifiers for which the event is an alternate for. 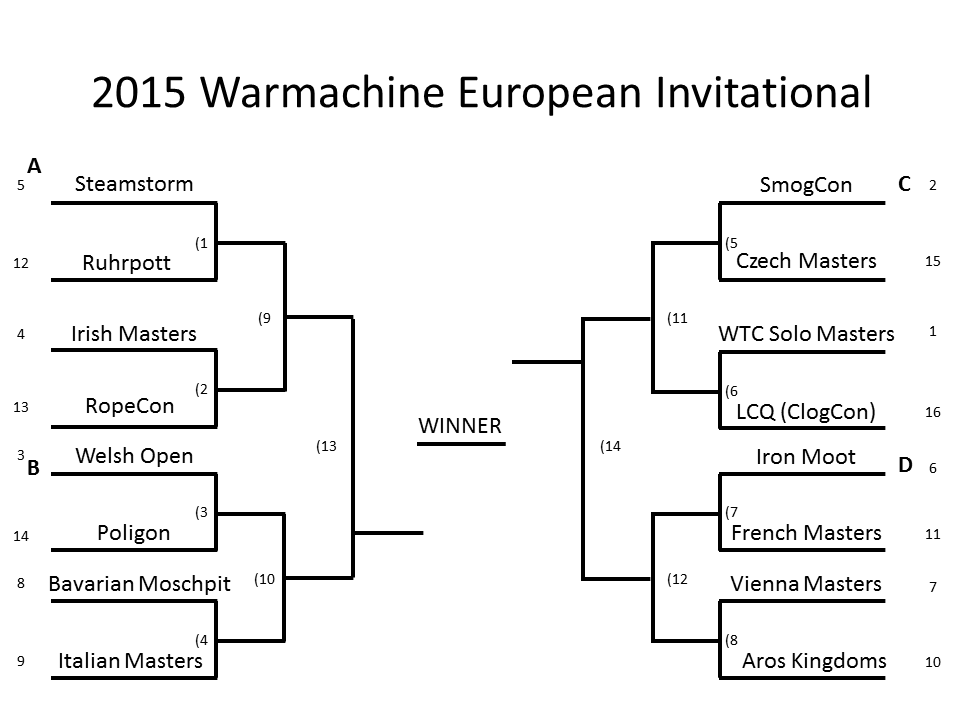 ClogCon (December 11-13, Rotterdam, The Netherlands) will host the 2015 Invitational.  ClogCon is a Privateer Press oriented convention following the American-styled convention format, which will include gaming for highly competitive players, casual players, and everything in between.  ClogCon will also host a Last Chance Qualifier (LCQ) for the Invitational during the course of the event.  All Qualified players earn free admission to ClogCon.  Further details about ClogCon and the Invitational will be released at www.clogcon.com or https://www.facebook.com/Clogcon or @ClogCon.  To contact us, email us at info@clogcon.com.

Each Qualifying event* has agreed to provide the army lists of their top 3 players which will be published at Page5.de so that players can follow along with the evolving game over the course of the year.  Furthermore, each of the Qualfiers* has promised to raffle off a ticket to their 2016 events at ClogCon so that players attending have the opportunity to see these events first hand.  Finally, Page5.de have agreed to cover all the events at ClogCon including video recording of select Invitational games as well as interviewing players on site.

We are excited to kick off this important tournament for the European community and look forward to working with all the important Qualifying event organisers from around the region.  We wish all the players looking to earn a spot at the Warmachine European Invitational the best of luck.